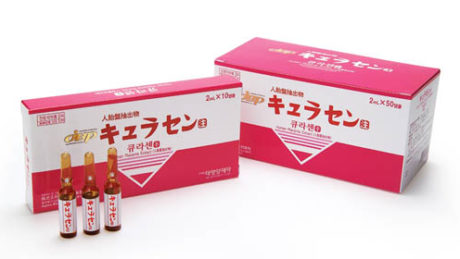 JBP Curacen(R) is the ethical drug specialized for beauty/cosmetic purpose, because of its high penetration capability into the skin as it consists of the lower molecular weight substances from the human placenta. 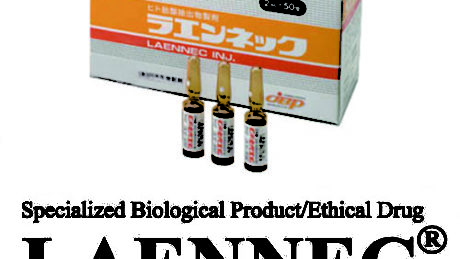 Laennec is the ethical drug manufactured with JBP’s unique technologies.

Laennec is the ethical drug manufactured with JBP’s unique technologies for effective extraction of variety of growth factors, cytokines, and other physiologically active substances from the human placenta. For instance, HGF (hepatocyte growth factor) promotes the proliferation of hepatic parenchymal cells for recovery of a damaged liver. Our product safety is ensured by the most rigid safety measures among existing scientific standards.

Warning: As the LAENNEC Injection is an ethical drug, JBP has never sold it on Internet.

Description
This product is a light yellow-brown or yellow-brown clear liquid with a distinctive odor. The pH level ranges from 5.5 to 6.5 and the osmotic pressure ratio (to physiological saline) is approximately one.

Dosage and administration
The normal adult dose is a 2 ml subcutaneous or intramuscular injection once daily. According to symptoms, the dose can be increased to 2 or 3 times daily.

1. Careful Administration
LAENNEC should be administrated with care in patients predisposed to allergies.

2. Important Basic Cautions
This product is manufactured from the extract of human placenta delivered full-term in Japan. In order to screen each donor, a complete medical history, interviewing such as a history of travel and serologic testing for viruses, bacteria and infection are performed, after nucleic-acid testing (NAT) to meet with requirements for HBV-DNA, HCV-RNA and HIV-1-RNA is carried out. In addition, it has been confirmed that high-pressure steam sterilization for 20 minutes at 121 °C during the manufacturing process is effective in inactivating various viruses such as HIV etc. Furthermore, although in the product test, the nucleic-acid test meets with requirements for HBV-DNA, HCV-RNA, HIV-1-RNA, HTLV-DNA, and parvovirus B19-DNA, patients should be made aware of the following points during administration: To date, the transmission of infection, such as variant Creutzfeldt-Jakob disease (vCJD), by administration of this product in Japan or other countries has not been reported. However, although safety measures are taken to prevent infection during the manufacturing process, it is theoretically impossible to fully eliminate the risks of infection transmission originating in a human placenta used as raw material. While safety measures during the manufacturing process to prevent infection, as well as confirmation of the necessity of treatment for the disease before administration are carried out, doctors should explain to patients and try to have them understand that when human placenta is used as the raw material of a product, the risk of infection cannot be fully ruled out.

4. Use in the Elderly
From clinical data and present use, no particular caution is needed in the administration of this product to the elderly. However, since elderly patients often have reduced physiological function, it should be administrated with care.

5. Use during Pregnancy. Delivery or Lactation
In reproductive development toxicity experiments on animals, including teratogenicity, this product can be considered not to have such toxicity.2)

6. Pediatric use
The safety of this product in premature infants, newborns, infants, toddlers or children has not been established due to insufficient clinical data.

7. Overdosage
Overdosage of this product and the resulting efficacy or safety have not been established (Due to insufficient clinical data).

8. Precautions for Use
Injection site:
In order to avoid any effect on tissue or nerves, the product should be injected subcutaneously or intramuscularly taking the following precautions:
a) For the injection site, to avoid nerve pathways, it should be administrated with care.
b) In the case of repeated injections, avoid injecting into the same site by alternating on the left and right side etc.
c) If intense pain or regurgitation of blood is observed, the needle should be removed immediately, and injected into a different site.
Opening the ampoule:
When opening the ampoule, it is preferable to wipe the part to be cut with an ethanol sponge before opening it.

The bioactive ingredients of LAENNEC are extracted from human placenta, and the primary pharmacological effects of this product can not necessarily be attributed to a single substance or ingredient. Therefore, evaluation of the pharmacokinetics (absorption, distribution, metabolism, and excretion) of this product has not been established. 2. Stimulatory effects of cellular DNA synthesis4)
Compared to control groups, in vivo experimental system using primary culture rat hepatocytes, the DNA-synthesis accelerator activity was observed in 2 μL/ml-administrated groups. That accelerator activity was equivalent to 10 pM of rHGF. The liver tissue in vivo experimental system using rats with acute hepatitis by ANIT was stained and the result of evaluation of the rate of hepatocyte nucleus in DNA synthesis period showed significant accelerator of DNA synthesis compared to the control groups.

4. Anti-fatty liver action7)
A 5-day subcutaneous injection of 1.2 ml/kg of this product in rats suffering from acute hepatic disorder with CCI4 resulted in a significant decrease in hepatic weight to body weight as compared with the control groups. Furthermore, total hepatic lipids and total hepatic cholesterol decreased significantly in the 3.6 ml/kg dose groups, and hepatohistological findings to support such results were seen and the body weight was realized.
After pretreatment of acute hepatic disorder with CCI4, there were no significant differences with regards to biochemical findings between the control groups and when 5-day repeated, subcutaneous administration of 1.2 ml/kg of this product was performed. However, in the 3.6-ml/kg dose groups, maintenance of lobular structure was better than the control groups with regards to hepatohistological findings.

This product is human-placental extract, and contains various biological active substances. However, the active ingredients of this agent cannot be specified as a single substance or several sorts of substances.

This product corresponds to a specialized biological product. Therefore, when this product is administrated, the product name, manufacturing No., date of administration (or prescription), name and address of patients should be reported and stored for at least 20 years in accordance with the order issued by the Japanese Ministry of Health, Labour and Welfare. This product should be used with attention to the point that the indication of this product is “improvement of hepatic function in chronic liver disease”.